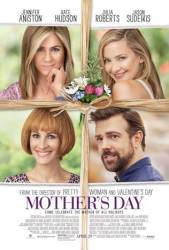 Nutshell***: A whole lot funnier – and, surprisingly, sweeter – than I anticipated.  Then again, I anticipated sheer, unadulterated crap.  Director Gary Marshall manages to take what could have been a hideous train wreck of sap and turns it into a light, fun piece that may not stick with you for very long, but won’t cause any lasting damage either. But for gods sake, someone mute that godawful “you’re the best mommy bouncybouncy” end-credits song!   Grade: B-

For those of you taking a peek at the poster, you’re right; Mother’s Day is an Upper Middle Class White Chick Privilege film times a thousand. People live in gorgeous homes, everyone has lots of money (except for one, and that gets wrapped up by closing credits), and nobody sees a person of color unless they’re sassy.  Still, for earnestness and sheer ability to let it all rip and do anything to get viewers to chuckle?  Can’t hate this film for grabbing everyone by the lapels and screaming “love me!”

A megawatt ensemble cast doesn’t hurt a fluff ensemble piece. It is known.  And for Mother’s Day, Marshall rounds up a slew of notable smile-givers and puts ’em to work. Jason Sudeikis is absolutely adorable as Bradley, a widower trying to navigate the world of his tween girls. (Keep your eyes peeled for a video of Bradley’s former wife, played by Jennifer Garner with fresh-faced enthusiasm that ups the dramatic irony.)

Sarah Chalke and Kate Hudson play together well as sisters Gabi and Jesse, who have been lying to their distant, conservative parents about their lives (hint: gay, and married to someone not white.)  Julia Roberts plays her lovable snarkster-with-a-secret-heart-of-gold (and a godawful wig), a HSN superstar whose life is one big career-fest, until grownup biological daughter Kristin (a too-cute for words Britt Robertson) tracks her down.  Seems Kristin can’t seem to commit to boyfriend/father of her child/all-around great guy Zack (Jack Whitehall) ’til she sorts her own shit out. Who’da thunk?

But it’s Jennifer Aniston and Timothy Olyphant that many modern women will understand best; divorced and doing pretty well at it.  What? No?  Well, how about divorced, and wife Sandy clings to the idea that she’s still #1 in her ex-hub Henry’s life…until he tells her he just remarried.  And his new wife Tina is half his age.  So how about splitting Mother’s Day with Tina, as she’s a mom now too?

Gotta admit I feared seeing this film.  As a survivor of parental abuse, let’s just say that parental-themed holidays aren’t ones that I fully understand.  Or rather, I get ’em, they just simply don’t apply to me, so I leave ’em alone.  But I found myself enjoying the hell out of this film.  Probably because it’s frothy, nonsensical, and outlandishly implausible. (You get a happy ending!  You get a happy ending!  Everyone gets a happy ending! )  For my people who have had less than stellar parental units, Mother’s Day won’t cause you to hear the choppers, nor will it make you cry for what you didn’t have.  It’s a nice balance of overblown perfection and fairy-tale wonderland, so absurdly unbelievable you can just sit back and enjoy the nice people working hard to make you smile.

Day gets a half-grade bump down due to an absolutely horrible, bile-inducing end-credit song that feels like Hallmark went on a cheap rum bender and threw up stale pablum. Luckily, a real song takes it’s place, but not before the sickening damage is done. (But do try to stomach it; there’s some hilarious post-film outtake bits you’ll wanna see.  May I suggest earplugs?)

*** For my horror-hounds who figured I was reviewing either the 1980 or the 2010 scary movie of the same name, I’m sorry.  I’ll get to those too, sometime soon.  For balance.

Professional nerd. Lover of licorice.
View all posts by Denise →
This entry was posted in Movie Reviews and tagged Holiday Movies, Movie Reviews, Not bad but not great. Bookmark the permalink.