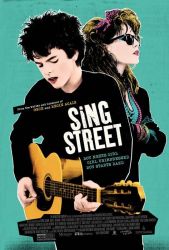 “No woman can love a man who listens to Phil Collins.”

Nutshell: Am I using “hat trick” improperly?  (GO SPORTS)  Oh who cares – Carney’s success with Once and Begin Again flows into Sing Street, creating a nostalgic look back at the 80s that makes this officially a three-fer of damn good musical films. The toe-tapper “Drive It Like You Stole It” seems poised to nab a Best Original Song Oscar, like “Falling Slowly” did for Once.  So put that in your puck and smoke it.  Or whatever pucks do. Grade: A-

It’s the 80s!  Yaaay!  Madonna, Duran Duran, Pet Shop Boys and so many more are flooding the airwaves.  For young Conor (newbie Ferdia Walsh-Peelo) these songs and videos are just something to drown out the sounds of his parents fighting, and to help him forget that they’ve pulled him out of his private school and into a public one called Synge Street, where he clashes with the headmaster Father Baxter. Music’s his brother Brendan’s (Jack Reynor) thing, and Connor is just along for the evening vids-on-telly ride.  That is until Conor sees Raphina (Lucy Boynton, BBC’s Sense and Sensibility) at school.  She’s beautiful – a wannabe model, in fact – and Conor asks her to be in a video his band is putting together.  Problem?  He doesn’t even have a band together, let alone a video shoot.  Meanwhile, mom and dad (The Commitments Maria Doyle Kennedy, and Aidan Gillen) are splitting up and selling the house, , and Raphina says she’s moving to London.  What better time to write down your emotions and put ’em into a song?

Director John Carney is known for his musicals, most especially the screen-to-stage smash Once.  I wouldn’t call this film a musical exactly, but if I absolutely had to plop it into a genre that’s where it’d go.  Characters don’t immediately burst into song; they sing when they’re playing in a band, or composing.  It feels natural.  Carney cast unknowns for the “Sing Street” band members, and they’re amazingly good.  “Whaddaya mean they’ve never been onscreen before” good.  “Lemme triple-check IMDb, I must have missed something” good. Ferdia Walsh-Peelo as Conor/Cosmo, with his young John Cusack-esque sweetness and depth, seems poised for more.  And speaking of lookalikes, Jack Reynor is a dead ringer for Chris Pratt’s long-lost brother.  I’m betting this won’t be the last time we see these boys onscreen.

As dream girl Raphina, Boynton balances mystery and wistfulness in perfect proportion, giving a performance that makes you understand how a boy would want to change his world just to get near her.  Meanwhile Gillen and Doyle Kennedy do great work as a couple who have just about had it with each other.  Gillen especially, as the husband who’s unhappy but can’t figure out what to do without his other half, is both surly and melancholy.

As with Once and Begin Again, Sing Street gives good music.  80s pop hits like “Rio”, “Steppin’ Out”, “Maneater” and “Pop Muzik” set the film firmly in 1985 while delivering fizzy beats to balance the darker scenes.  And Street doesn’t shy away from the uglier side of growing up; bullies, adults in authority being total…jerks, and heartbreak.  This is a becoming-who-you-are story for most of the characters here, regardless of their age.  And seeing what these characters will do, and how they transform (or stubbornly cling to things) as the story progresses is what gives Street its pull.

Hiccups?  Sure, there are a few.  Sometimes the plot goes wobbly, and character motivations seem to turn on a dime.  But neither of these issues happen often enough to jolt anyone out of the story, they just feel a bit less than what’s come before, or what comes later.  Chalk it up to teenage awkwardness?  Sure, why not.  The combination of soundtrack, cinematography and whipsmart costuming puts these problems on the far back burner, keeping the overall vibe intact.  Plus, Sing Street manages to take a story about a group of high school nobodies and turns them into the group of kids you wish you’d known when you were in school.  So out they’re in, so far from the pack that they come around to being the coolest kids on the street without ever trying.

The climax of the film has the band Sing Street playing an end of school party at Synge Street, where Father Baxter is none too pleased (but then again it seems the Father is never pleased.)  But it’s the rehersal, when Cosmo tears into “Drive It Like You Stole It” and his imagination turns the gymnasium into a 50’s style Back to the Future throwdown, that really sparkles.  Yes, the climax itself is beautiful and brilliant, but when Conor fully embraces his Cosmo persona and imagines what things could be like if everything came together?  Well, that’s the magic of music, right there.

Professional nerd. Lover of licorice.
View all posts by Denise →
This entry was posted in Movie Reviews and tagged Movie Reviews, Musicals. Bookmark the permalink.