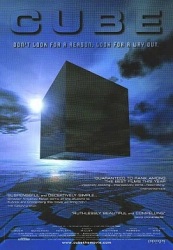 Story: Seven people find themselves trapped in a maze of small cubes.  Catch?  They don’t know the way out, and many of those cubes hold deadly traps.  I’m sure these seven folks will band together and help each other escape. Let the fun begin!

Scares: Lots and lots of suspense, and a few jump scares.

Splat factor: Let’s just say that one character gets sliced into little tiny cubes (GET IT?) and that’s just the opening scene.

Trick or Treat?: Put this film in the “Wow, I Still Enjoy It” file.  Because we all know that there are films we’ve seen that upon re-watch…are found lacking.  Not this one.  Cube is an fascinating character study masquerading as a horror film.  This movie may have been made 20 years ago, but the themes are relevant today. Especially relevant. How people can turn on each other simply because they don’t see things the same way, and that those who oversee everything may not have our best interests at heart.  And how someone can be simply living their life one moment, and then become persona non grata – or worse, simply of no further use – the next.

Less a horror movie than a character study…with gore. No, I’m not being one of those “no movie I find interesting is horror” idiots. I just found myself wanting to know more about how these people ticked, and why they were put in this situation. Cube has been called “Kafkaesque” and that’s definitely true. Cube is menacing, strange, and oftentimes freaky. Characters become paranoid, confused and downright homicidal. And the ensemble cast pulls you into their small, revolving world almost immediately.

Apparently a remake is in the works. Of course. I seriously doubt that it’ll be half as fascinating.

Professional nerd. Lover of licorice.
View all posts by Denise →
This entry was posted in 31 in 31, In Horror, Movie Reviews and tagged 31 in 31, 90s Horror, Horror Movies. Bookmark the permalink.