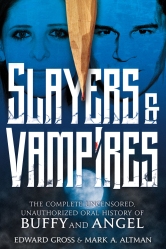 Published just in time for the 20th anniversary of BtVS (whoa), this collection of comments, anecdotes and deep thoughts is obviously a treasure trove of delight for fans of the Whedonverse.  But it’s also a great book for anyone who’s interested in how a show gets made, how a show stays on the air, how a show continues to deliver fresh ideas years in…well, you get the idea.  Slayers & Vampires is an absolute must for anyone interested in the behind-the-scenes world of television.

But wait, there’s more! (Why am I sounding like an infomercial?  Dunno, but let’s roll with it.) I loved the deep dives into topics like feminism on TV, and how the mythology of vampires and how perceptions have changed.  And of course the Willow/Tara relationship and how that relationship ultimately flipped the script on LGBTQ relationships on TV. For the better. You can thank Buffy for that y’all.  She saved the world a lot, indeed.

One uncomfortable bit though; “Make no mistake, Joss Whedon is a god.” – um, after the dirt spilled this September, that’s an uncomfortable opening to this book. Not their fault though; how could the writers have known? Though Altman’s assessment – Whedon as “wizard of words” – is true enough.  That he’s human and screws up royally ain’t something to laud, but it is something to bear in mind for anyone who puts their heroes on too high a pedestal.

Anyway, it’s obvious that these guys are big fans. Huge. They sling quotes and characters through their narrative as descriptors, as well as digging through the characters themselves. And it’s refreshing as hell to read a book about Buffy, Angel, et al. and get the feeling that the people who put the book together are just as fannish as I am. Not to hate more studious tomes (grab Buffy and Philosophy if you get a chance) but it’s fun to simply dig into a book that talks a fannish language.  All the comments from the famous folks peanut gallery are a whole lot of fun too.

Yep, Gross and Altman gathered a huge group of folks for this “oral history”.  From Joss to SMG, Carpenter, Green, Marsters, Boreanaz, Marti Noxon, Tim Minnear, and even scholarly types and famous fans (what up, Guillermo Del Toro and Steven Niles!), Gross and Altman cast a wide net. Basically, if a person was involved in Buffy or Angel, they’re represented here.  Sure there are a few exceptions, but there’s plenty of talky-talk for even the most ardent fan. And yes, my beloved Tony Head has a few things to say.  Much to my delight.

I can feel the authors’ love for their subject, and their excitement is contagious.  Plus, as this book was purposefully published for the 20th BtVS anniversary, there’s a fast-paced feeling to the chapters that carried me along.  That, or I was so sucked in I couldn’t help but rush through to see what the next page had to offer.

I started from page one and headed straight on through ‘til morning.  But you can open any page of Slayers and Vampires and find something fascinating, thought-provoking, or laugh-out-loud funny. Recommended for Buffy fanatics, my fellow Giles-heads, and all who are looking for a fun read that’ll keep you in party anecdotes for this coming holiday season, and into the next one.