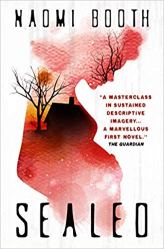 This is a first novel? Wow. Absolutely stunning. Feels a bit like Shirley Jackson’s We Have Always Lived in the Castle or Charlotte Perkins Gilman’s The Yellow Wallpaper. Alice, a young woman who’s almost-to-the-finish-line pregnant, moves to the Australian Outback with her partner Pete to get away from the city and ready themselves for their baby. Oh, and did I mention that there’s an outbreak of “Cutis Sigillatis”, a horrible (and thankfully fictional) condition that causes people’s skin to rapidly grow over every bodily opening? Is this caused by pollution, toxins in food, or something else? Whatever the cause, Alice becomes more and more unsettled, focusing solely on cutis to the detriment of her relationship, her job, and human interaction.

But is Alice an unreliable narrator? Is her anxiety coloring her perception, her memories? Is the threat really as bad as she believes, or is she panicked and paranoid? This character’s thoughts and panic feel similar to the film Safe. My heart breaks for Alice, as Booth slowly lets us see what’s going on around her haunted protagonist, and questions Alice’s level of unease. Pete’s love, friend Mara’s affection, everyone’s worry; they’re all pushed aside as everything around Alice becomes something to be feared. Booth inches closer to apocalyptic and psychological terror with every turn of the page, and damn it works.

Booth’s tale grabs you, demanding your attention by its powerful narration, and her use of thematic patterns that resonate all too well in today’s politically charged climate. The disintegration of humanity as the poor and “Other” are treated as less than. Medical care, housing, and basic empathy are set by the wayside by a government that would rather brush things under the rug. The socioeconomics of pandemics, and how the human animal can willfully ignore/push aside threats if they’re not immediately affecting them individually. It’s a lot to take in, but Booth manages to juggle all this and lead to an ending that may not be tied up with a bow, but provides satisfying. And all in less than two hundred and twenty pages. Sealed is a compelling tale of societal and personal dissolution from a powerful new literary voice. I for one am looking forward to more.