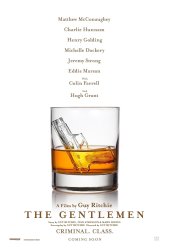 Story: Marijuana honcho Raymond finds a skeevy reporter named Fletcher in the kitchen. So why not listen to Fletcher’s tale of Raymond’s boss Mickey Pearson, and how the entirety of the English crime world has been rocked by Pearson’s plan to retire and live a quiet life. Cue the flashbacks!

Remake, Sequel, Based-On, or Original: Original, but it vibes with the best of Ritchie’s crime caper stories.

Gotta say: Confusing, comic, and crazy. Yep, Ritchie has shaken off the flop dust of last year’s Aladdin and come into the new decade strong. Gentlemen is a film that harks back to his early stories of violence, interwoven plots, and lots and lots of mayhem. And it works.

Ritchie’s fingerprints are all over Gentlemen; if you saw a scene from this film and had to guess who’d directed it with no further info, it’d be a cinch. His hallmarks are obvious, from the whipsmart (and super fast) dialogue to the deep dives into various socioeconomic levels of England, Ritchie paints a vivid picture of vibrant subcultures, many of which are more than a little…unhealthy. Gorgeous cinematography, detailed set design and groovy costuming (I want the boots Michelle Dockery wears in the end scene so desperately, and don’t get me started on Raymond’s gorgeous digs) pulled me into the action immediately.

It helps that Ritchie’s ensemble cast all play to the cheap seats, giving 110% at all times. Dockery’s Cockney accent is a treat; with this role as Mickey’s wife Rosalind she leaves Downton in the dust. The Succession‘s Jeremy Strong plays a hopeful bidder for Mickey’s business, and gives a slyly comic performance that’d fit well in a Christopher Guest mockumentary. (Somebody make that happen, please.) And holy cow Henry Golding is gold as young upstart “Dry Eye”. As with Strong, Golding deftly shades his character, bringing out ruthlessness and foolishness in equal measure. Can you tell I loved watching all of these actors work? I really did.

I could go on and on about the enjoyment I got watching these performances, but let’s just say that Colin Farrell, Eddie Marsan, and Hugh Grant (who practically winks at the audience) are just as delightful. Special shout-out to Chidi Ajufo as Raymond’s muscle Bunny. He does more acting with a look than many other larger performances I caught last year. Yeah yeah; Matthew McConaughey simply plays a criminal-minded version of himself, and I almost expected him to sit himself down into a Lincoln and drive off as the credits rolled. But it’s McConaughey. He’s fun to watch (let’s pretend Serenity never happened.)

Is Gentlemen a shakeup of stuff we’ve seen before from this director? Yeah, sure. But Ritchie knows what he’s good at, and enjoys doing what he’s good at. That enjoyment leaps off the screen, and gets into your system if you let it. You’re either down for the crazy ride – and the juggling act you’ll need to do in order to keep all the subplots, twists, and double/triple crosses coherent – or you’re boring.

#Protip: Check out the menu in the pub during the opening scene; what a lovely list of nibbles. Or perhaps don’t; it’ll just make you hungry. Your popcorn will pale in comparison.

Professional nerd. Lover of licorice.
View all posts by Denise →
This entry was posted in 7 Pieces Of, Movie Reviews and tagged Movie Reviews. Bookmark the permalink.