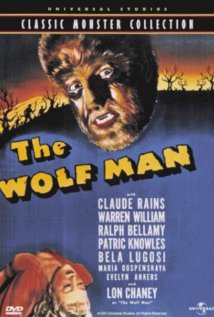 Story: The Invisible Man’s second son gets an up-close look at mythology when he gets bit by a wolf one evening.

Scares: Even though you know what’s coming, it’s an eerie treat.

Splat factor: Not so much; just about everything happens off-screen or in shadow.  Plus, it’s an old-school black & white film.  What’d you expect, Eli Roth?

Closing scene “shocker”?: Not one bit.  This is a fun morality play with no need for a “gotcha”.

Remake, Sequel or OG (Original Ghoul)?: Although it’s not the first werewolf film ever made, it’s the one most folks think of when they think of full moon fever.  And it’s an original, and while there are no sequels, there were a few spin-offs with the character.

Trick or Treat?: Old school goodness of the highest order, like a caramel apple of awesome.  It’s great to see Lon Chaney Jr. as Lawrence Talbot  mackin’ on his ladylove Gwen (Evelyn Ankers) long before his were-dom.  A wolf becoming a werewolf, now that’s karma!  This film takes the lycanthropy myth and spins it into an engaging tale of one man’s struggle to figure out if he’s crazy, or truly cursed.  This take of the werewolf legend is possibly the best one ever, and the years only reinforce that fact.  This film sets the stage for tragic monsters (although this theme had been done before in Werewolf of London and Wolf Blood), and Lon Chaney Jr. gives the performance of his career.  Claude Rains as the elder Talbot and Bela Lugosi as the old gypsy that sets off this horror tragedy are extra sweet treats.  And who can forget the old gypsy woman (the fantastic Maria Ouspenskaya)?  Always remember: even a man who is pure in heart and says his prayers by night, may become a wolf when the wolfbane blooms and the autumn moon is bright.