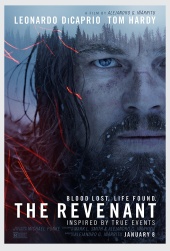 Happy After-The-Holidays!  Get everything you wanted?  Yes?  No?  Either way, want a free pass to a movie folks are buzzing about?  Well, I’ve got passes for the Baltimore area screening of The Revenant!  Synopsis!

Inspired by true events, THE REVENANT is an epic story of survival and transformation on the American frontier.  While on an expedition into the uncharted wilderness, legendary explorer Hugh Glass (Leonardo DiCaprio) is brutally mauled by a bear, then abandoned by members of his own hunting team. Alone and near death, Glass refuses to succumb.  Driven by sheer will and his love for his Native American wife and son, he undertakes a 200-mile odyssey through the vast and untamed West on the trail of the man who betrayed him: John Fitzgerald (Tom Hardy).  What begins as a relentless quest for revenge becomes a heroic saga against all odds towards home and redemption.  THE REVENANT is directed, produced and co-written by Alejandro G. Iñárritu.

The trailer looks gorgeous, and I hear tell the bear-mauling scene is incredibly realistic (that there’s also an FYI for folks who may be squeamish.)  Iñárritu knocked it out of the park with Birdman, so I’m hoping for good things with The Revenant.  Who’s with me?  Well, right this way…

What: ADMIT TWO passes for the Baltimore area screening of The Revenant!