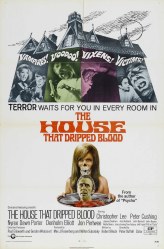 “It’s that house! There’s something about it!”

Story: Four stories. One house. All built by Psycho’s Robert Bloch. Why don’t you come in?

Scares: Lots of quality creep, and a few flat-out shivers.

Remake, Sequel or OG (Original Ghoul)?: Anthologies are everywhere. But this one’s a classic.

Oh. You want more? FINE. This groovy anthology is early 70s horror heaven. The wraparound – a detective looking into the disappearance of a film star who was renting the titular home – is actually very well done, and a nice change from the usual Cryptkeeper, or other spooky narrator. (Sorry, Cryptie.)

Out of the four stories, “Sweets to the Sweet” is one of my favorite stories ever, and Christopher Lee as a heartless father whose emotional abuse becomes dangerous. It’s Bloch at his best. And it’s lovely to see the fantastic character actor Denholm Elliott as a mystery writer in the first story, Doctor Who‘s Jon Pertwee in the fourth, and of course, the great Peter Cushing in the second (and, sadly the cheesiest) story.

Yes, these stories haven’t aged without a blemish. They’re a little campy and the staging and score are more theatrical than cinematic, definitely giving the film a retro vibe. But the overall sense of foreboding and killer (AHEM) payoffs are still there. If you haven’t already seen these, what are you waiting for?

PS: check out the waxwork of Lee as Dracula in the second story. It’s in the background, but a fun Easter egg. So’s catching a glimpse of a young Joanna Lumley (Absolutely Fabulous) in the final story. Enjoy!

Professional nerd. Lover of licorice.
View all posts by Denise →
This entry was posted in 31 in 31 and tagged 31in31, Anthologies, Christopher Lee, Classics, Horror Movies, Peter Cushing. Bookmark the permalink.