Catching Up Review: “The Neon Demon”

Sometimes I can’t get to a screening.  Sometimes there isn’t a screening available for a particular film.  Sometimes I’m just lazy and wait until the Award Season Onslaught to catch films that came out during the “For Your Consideration” award season year.  Typically, it’s all three.  So here’s a nutshell on what I think about one particular film: 2016’s Neon Demon. 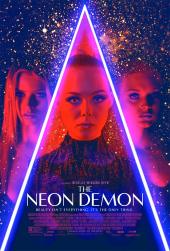 Tries to be Cronenberg or The Hunger. Fails. This film  aims for “weird” and “shocking” to draw viewers attention away from the fact that the director has nothing to say.

There’s no denying it’s a gorgeous, often fascinating piece of cinema. But the message – the moment you walk a runway you become a narcissistic jerk – is as lightweight as this film’s character development. A movie about society’s obsession with beauty, is itself obsessed with its own beauty; there’s a sort of beautiful irony about that.  Pity that’s the most interesting thing about this film.