“Valerian and the City of a Thousand Planets” – beautiful, messy 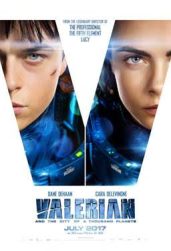 Nutshell: Dazzling, beautiful, uneven.  The lightning-in-a-bottle that was Besson’s The Fifth Element doesn’t strike twice here, even though the visuals and world-building magic is definitely present and accounted for.  It’s as if with Valerian, Besson focused more on the universe he was creating, rather than the characters that were meant to live in it and what they’re supposed to achieve. Which makes it a beautiful, fascinating, mess. Grade: C+

Story: Cad-about-Universe Major Valerian and his partner Sergeant Laureline are tasked with protecting the World State Federation, a league of planets and their respective life forms.  When the two are sent to Alpha – an ever-expanding space station where a thousand different types of beings co-exist – to protect Federation officials from a strange threat, they encounter much more than they bargained for.  Cue the cool aliens and groovy set pieces!

Genre I’d put it in: Batshit Crazy Space Opera Where The Worlds Are More Interesting Than The Plot

Gotta say: Let me just start by saying that I absolutely love Besson’s The Fifth Element.  And while there was a whole lot of amazing buzz when Valerian first made the film fest rounds, it’s no Element.  The wonder and magic is definitely there, but Element‘s ability to delight and entrance me just didn’t happen this time. Why’s that?

Easy.  I never bonded with the characters.  While Dane DeHaan and Cara Delevingne are game as Valerian and Laureline, they don’t share the Sam & Diane “will they or won’t they” chemistry the story assumes they have.  So it comes off as awkward.  Or worse yet, embarrassing.  Whey they work together as partners, it’s fun and believable.  But when Valerian tries (over and over) to woo Laureline?  Uh, dude just don’t.  There’s no onscreen romantic chemistry between the two, even though they work together well as a buddy/comedy team.

Perhaps it’s because Besson worked on The Fifth Element for over 20 years before it hit screens.  Perhaps it’s because he’s such a fan of the comic book that he focused all of his attention on the universe he was creating instead of the story. Perhaps it’s just a bad screenplay. Whatever the reason, Valerian looks all shiny and wonderful, but it’s a chocolate bunny of disappointment; all deliciousness on the outside, but it can’t hide that it’s only a hollow empty shell.

Don’t get me wrong, Valerian is spectacular in the visual, creative department.  Aliens glimmer and gleam, wobble and shimmy, drool and glower.  Planets look literally fantastic, from that perfect beach you never thought you’d ever be able to fully imagine, to a gritty “Big Mall” that exists only on an alternate dimension and requires shoppers to wear special glasses and gloves to visit.  It’s amazing, and I was often slack-jawed with wonder at it all. Then the characters would start talking, and I remembered that the plot didn’t really have anywhere it really wanted to go.

There are moments of brilliance here, as if to hint at the stupendous movie it could have been.  Laureline gets treated like a dress-up doll by a group of aliens, and let’s just say things don’t go exactly as planned because [SPOILERS DARLING].   It’s a fantastic subplot, and it showcases Delevingne (who could use the boost after being treated so poorly in Suicide Squad)  as well as introducing another character into the mix for plot driven reasons rather than “ooh, cool lookit!”

That character would be Bubble, played by Rhianna.  And RhiRhi is definitely growing in her art. As a shape-shifting alien called Bubble, she’s sweet, playful, and even gets in a few emotionally affecting moments.  It’s a light, refreshing point in the story, and with her scenes being intercut with the Laureline dress-up ones, it’s easily the best part of the film.  Heck, I even got Fifth Element goosebumps for a minute there.  Then, of course, things go back to the usual run-run-LOOKITLOOKIT-run storytelling.  And I went back to simply enjoying the pretty.

Another thing to enjoy is that amazing soundtrack.  Besson always seems to have an amazing score, and the additional music here is also top-notch.  From “We Trying to Stay Alive” by Wyclef Jean & Refugee Allstars, a touch of Bob Marley’s “Jammin'”, and the beautiful “Bubble Dance” by Julien Rey.  The movie even kicks off in the best way possible; with Bowie’s “Space Oddity” playing as we watch Alpha station grow and grow over the years. And while that seems like a lazy musical choice for a space film, believe me when I say this opening scene is spectacular. File it under Scenes That Hinted At The Film This Could Have Been.

Besson continues his usual themes of personal choice, love conquering all, and the power of the state.  But they don’t feel like part of the story.  They feel tacked on, as if the filmmakers remembered viewers like to feel things, and threw in some moments that hit you over the head in an attempt at the feels.  That’s not how it feels while watching The Fifth Element, La Femme Nikita, or The Professional.  Heck, even Lucy (which I adore, btw) had a stronger tie to its larger themes. It breaks my heart that this film is so beautiful, and yet so wobbly.

Valerian would work well as a double feature with The Fifth Element, if only to have two films to marvel at in terms of beauty and inventiveness. Because regardless of the lightweight buddy-cop storyline and throwaway characters, Valerian is truly a visual feast. But maybe cue up Element as the second feature.  End things on a high note, with a story where characters are worth more than a second glance, and the story doesn’t have to try to tug at your heartstrings, it just does.

#Protip: There are a lot of fan theories that Valerian shares the same “universe” as The  Fifth Element. While Element takes place in the 23rd Century, Valerian takes place in the 28th…but who knows what could happen with the current love of shared universes?  Only the studios know for sure.