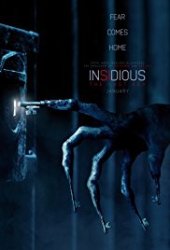 Nutshell: There’s no doubt that Lin Shaye is an incredible actress that brings top-notch talent to this series as psychic-in-charge Elise. There is, however, serious doubt that this series can continue, considering how it scrapes up the usual jump scares and night-vision tactics that have been a staple of the “other realms” horror subgenre.  Last Key is a lot of scary fun, but if this franchise is to continue, there needs to be fresh…blood. Grade: B

“I know where they go. They go into the dark.”

Story: Psychic Elise Rainier (Shaye) gets a phone call from someone desperate for her help.  Problem is, that someone lives in the house she grew up in.  A house jam-packed with ghosts, demons, and of course that red-faced creep that’s been around since the start of the franchise.  Will Elise and her crew try to help?  What do you think?

Genre I’d put it in: “There’s Something Out There” Horror

Gotta say: After Insidious 2, I lost hope for this series.  I have to admit that I haven’t yet seen part 3 yet.  But I decided to hop into Last Key with that lack of knowledge and only the slightest memory of what happened in the earlier films.  So I can say that if you walk into this film as your first foray into the series, you’ll be doing a lot of “whodat?” and “what are they talking about?” at first.

Most obvious are the two sidekicks that Elise has with her.  Leigh Whannel and Angus Sampson play paranormal investigators Specs and Tucker, and for the life of me I couldn’t remember their characters from the first two films. I guess that says something about the strength of the characterizations here.  They toss off jokes and puns so bad, dads everywhere wince.  But Whannel and Sampson are game, even though they’re only there for comic relief, and to hit on Elise’s two twenty-something nieces Imogen and Melissa (Calitlin Gerard and Spencer Locke).  Specs and Tucker hit on them All The Time.  It gets grating after a bit, and downright sexist at times…but I guess it’s funny, if you’re drunk or something.

But then things settle into the usual routine of ghost/demon horror stories.  There’s the usual flashback, then “present day” – or , in the case of Last Key, a shift to a time years later, but still before the first to films.  The demon in this film is intriguing as hell, and has an interesting way with the keys at the tips of his fingers.  Though he does look like a version of Iron Maiden’s Eddie the Head, or perhaps his cousin once removed. I hope IM is getting royalties.

As Elise delves further into The Further, her personal history is fleshed out, including time spent with her brother, who’s played by Bruce Davidson when they meet again as adults.  Elise’s horrific childhood is shown in detail; her abusive father (Josh Stewart, Criminal Minds) and loving doormat mother (Tessa Ferrer, Grey’s Anatomy), her ability to see ghosts, and her running away at age 16.  It’s an interesting backstory, with a twist that I didn’t see coming until much later into the film.

The ending is foreshadowed so heavily that I expected neon lights to flash every time a particular item was shown.  The whole “power of love” thing is sweet, and I loved it in Harry Potter, but this felt a bit too much like Love Ex Machina for my taste.  Still, the climax is fun, if only to watch Eddie the Head’s cousin do his thang.

The scares would be much more effective without the SCREAMING LOUD MUSIC BOOM BOOM every time something “spooky” happens.  I was too busy cursing the suddenly overloud music to truly be sucked into the pop-ups director Adam Robitel threw onscreen.  Though I do have to admit there’s one scene with a bunch of suitcases that did get me.  I ain’t ashamed.  In fact, I’m pleased.

So if you’re game for a bit of lightweight horror filled with jump scares all wrapped up in a happy ending (of sorts, because we all know what happens to Elise in Insidious), check this out.  And hey, one of Elise’s nieces has the sight, so perhaps there’ll be more Insidious films coming?  Place your bets.

#Protip: Want more spooky ghost stories?  Why not check out classics like The Changling with George C. Scott, or Ghost Story with Fred Astaire, Patricia Neal, and Douglas Fairbanks Jr.?

Professional nerd. Lover of licorice.
View all posts by Denise →
This entry was posted in 7 Pieces Of, In Horror and tagged Horror Movies, Insidious, Movie Reviews. Bookmark the permalink.