“A Wrinkle in Time” – definitely a forehead wrinkler 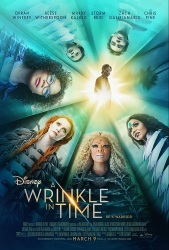 “We can’t take credit for your faults. It’s how you use them that counts.”

As the movie adaptation of A Wrinkle in Time is a confusing hodgepodge of…stuff?  So will my review be!  Talk like Yoda you will, if seeing this movie you must.

What a complete and utter waste of talent.  Award winning talent.  Jesus, you’ve got Witherspoon, Mbatha-Raw, Kaling, Galifinakis.  OPRAH.  And let’s not forget the incredible directorial talents of Ava DuVernay (Selma, 13th). Yet with the messy disjointed script from Jennifer Lee and Jeff Stockwell, nothing makes sense here.  Nothing.

No, I didn’t read the books.  Yes, I know that’s horrible.  But as I never laid hands on ’em back in the day, I figured I’d go in blind, save a quick peek at the Thug Notes synopsis (and if y’all aren’t subscribed to that YouTube channel, you’re missing out.)  And boy howdy was I lost in the weeds.  I had no idea what was going on, nor what they needed to overcome.

Okay, so I’m not that daft. I understood that young Meg (Storm Reid, #bestnameever) and her little brother Charles Wallace (Deric McCabe) miss their dad, an incredibly gifted scientist that disappeared four years ago.  And I get that Meg and CW meet three…beings (Witherspoon, Kaling and Oprah) who help them “wrinkle” time and get to various planets in order to search for poppa.

No amount of talent can patch the messy gaps in this adaptation. None. But it’s sure pretty to look at, with hyper-surreal colors, glorious cinematography and costuming.  Oh those costumes!  The CGI is so-so; after I’ve been to Doctor Strange-land, seeing Wrinkle‘s “It” planet was absolutely underwhelming.  (Read: on the level of an average videogame.)

What else?  This film is a total waste of Bellamy Young.  I adore her on Scandal, and she’s barely onscreen for 2 minutes. That’s a generous estimate, btw.  After seeing her Stepford gloriousness in the trailer, I couldn’t wait…but I was disappointed.  But since that was a feeling I had throughout the film – that, and confusion – I figured I’d unpack that particular bit of letdown at a later date.  Like now.

And okay, one positive.  The message of the film – that love can move mountains/space/time/yada yada – is a beautiful one.  It’s jumbled in amongst the wreckage of a plot, but it’s there.  And that’s lovely.  So’s the familial chemistry between Mbatha-Raw, Reid, McCabe and Pine (as the lost poppa).  So there.  I’m not completely hateful.  Just 99%.

Just like when I bolted from the theater as the credits for this film rolled, I’m not gonna spend a second more on this film than I absolutely have to.  So…yeah, this film is a mess.  Go see it if you’re a huge fan of the book, but if not?  You’ll be completely baffled by this beautiful bullshit.

Professional nerd. Lover of licorice.
View all posts by Denise →
This entry was posted in Movie Reviews and tagged Family Films, Movie Reviews, Movies So Bad Creators Should Be Ashamed Of Themselves. Bookmark the permalink.

3 Responses to “A Wrinkle in Time” – definitely a forehead wrinkler