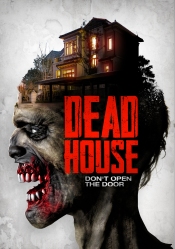 “This really is a magnificent house. Really lovely things here.”

Story: Three psychotic killers (okay, two and the requisite “I don’t want to be here” member) pick the wrong house to mess with. No, not Charles Bronson’s pad. One where the dad is a scientist with very dangerous research subjects. Zombies, I’m talking about zombies.

Things get off to a good start, with a look at exactly how depraved the killers are, before shifting to the family dynamic, and the father’s basement lab. When the two groups meet, there’s a chilling suspense as the killers play their disgusting games. (Spoiler: they love debasing their captives, especially through sexual abuse.) Things should get good as the basement zombies start to do their thing, but instead things get muddy. How the zombies break out is undisclosed; they simply head upstairs. You’d think there’d be a better system in place. But one person leaves the basement door open a crack, and boom. So much for all those individual cells. Ah well.

I think they forgot this story was happening at night. Yeah, things could have stretched into day, but not with the fast paced way the plot moves. Then there’s the strange shift in a character near the end of the film. There’s absolutely nothing up until then that would lead to what this character does. So when the inevitable karma strike hits? It’s unfulfilling. (The fact that said karma happens as a throwaway shot in the ending prologue montage adds insult to injury.)

Other than that, a fun bit of low budget horror that knows how to crank up the tension…but doesn’t quite know what to do after that. Enjoy the first third, disengage your brain and dig the effectively gruesome FX once the zombies come around, then boot up the cellphone game of your choice during the last fifteen minutes or so. That final act is definitely best watched when you’re only giving it half your attention. Bummer, because with a tweak here and there this could have been a genre standout.

Professional nerd. Lover of licorice.
View all posts by Denise →
This entry was posted in 31 in 31, In Horror, Movie Reviews and tagged 31 in 31, 31in31, In Horror. Bookmark the permalink.