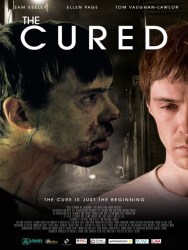 “Are you one of the Cured? Will you be sick again?”

Story: What happens if those infected during a zombie-like outbreak were cured? Worse yet, if they remember what they did while infected? The “The Third Wave” of cured individuals are finally being reintegrated into society. I’m sure they’ll fit back in fine, and will be welcomed with open arms. Meanwhile, the final 25% of infected, the “Resistant”…they’re still out there.

Scares: Lots of chills during this slow burn.

Splat factor: Strangely, not much. Yes there’s blood and carnage, but not much onscreen.
Closing scene “shocker”?: It actually ends on a possibility of hope. Fancy that.

Trick or Treat?: WHOA. The idea of a film that deals with the post-post-apocalypse? I was dying to check this one out. (Pun not really intended, but let’s roll.) This film is the kind of movie your friends that “don’t do zombies” will get sucked into just as much as horrorhounds will, though the non-genre lovers may overlook the blood while we scooch closer to the screen.

Setting/filming this in Ireland layers the subject matter. The Cured resistance – because of course there’s a resistance group – gathers in a Catholic church, uses molotovs, and other ways to no longer be afraid… But as with many terrorist groups, the leader has his own agenda, and power’s what he’s after. Ah, the parallels to so many historical and modern movements.

Ellen Page is badass in so many ways, as the sister-in-law who takes in her Cured husband’s brother. As Senan, Sam Keeley is equally wretched, heartbroken, and hopeful. And as the Cured with a mission, Tom Vaughan-Lawlor channels the self-possessed assurance of true malevolence he’d later use as Ebony Maw in the MCU. His performance is quiet and chilling. Okay one more shout-out; as Resistant patient Jo, Hilda Fay’s emoting is wonderful. Definitely pay attention, you’ll be glad you did.

What do you do when your world doesn’t want you? It’s a powerful message couched in a think piece horror film. And it’s really good stuff. Look for this if you’re in the mood for an intriguing concept with deep ideas. And really, who wouldn’t love that?

Professional nerd. Lover of licorice.
View all posts by Denise →
This entry was posted in 31 in 31, In Horror, Movie Reviews and tagged 31 in 31, 31in31, Horror Movies, In Horror. Bookmark the permalink.