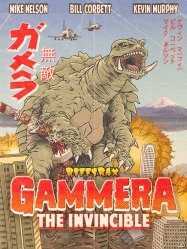 Scares: It’s scary how much fun you’ll have watching this.

Remake, Sequel or OG (Original Ghoul)?: A RiffTrax running commentary satire of the original film (aka Gamera, the Giant Monster), which is the first of the Gamera series.

Trick or Treat?: From the misspelling of Gamera and the crazy “science” to the rampant sexism and …KENNY. One of the best non-studio audience RiffTrax out there, Gamera is a great Kaiju film on its own, but is doubly fun with the riffing.

You don’t need to have watched the riff-less movie to enjoy this, but I say go watch it anyway. This series started by trying to get that sweet sweet Kaiju money Toho Studios was raking in with its Godzilla franchise. But Gamera – with twelve films and counting – became a phenomenon on its own thanks to the cool monster design and his gig as defender of earth. (Just like a certain skree-onk-ing giant lizard…)

Grab some popcorn and enjoy.

Professional nerd. Lover of licorice.
View all posts by Denise →
This entry was posted in 31 in 31, In Horror, Movie Reviews and tagged 31 in 31, Horror Movies, In Horror, Kaiju Fever. Bookmark the permalink.