“Kong: Skull Island” – Kong gets monstrous in this excellent reboot 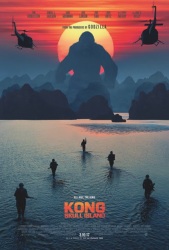 Nutshell: Outstanding FX, fantastic (if a bit too done-before) soundtrack, and a cast that makes you feel all the fear and wonder of being stranded on an island full of kaiju. A popcorn flick par excellence, even with a few bumpy Snidley Whiplash moments of villain characterization. All hail the King, indeed. Grade: A-

“What Imaginary Monster are you hunting now?”

Story: Picture it, 1973.  The Vietnam War was ending, and two scientists wander into a congressional office to ask for research funds.  Why?  Because there’s an island – Skull Island – that could house a monster.  Oh, and those troops you’re recalling?  Could we have a few please?  Just to be on the safe side, I’m sure things’ll be fine…

Remake, Sequel, Based-On, or Original: A reboot of King Kong, and the second film in the Warner Brothers/Legendary & Toho Co. “Monsterverse”.

Gotta say: Let me just stop for a moment right here and plant a flag in the ground.  Nobody, NOBODY, will ever top 1933’s King Kong.  Fay Wray, stop-motion Kong, and that amazing final line, “T’was Beauty killed the Beast.”  It’s the first, it’s the best. 1976’s Kong is a drunk-watch hoot; even Jessica Lange’s damsel in distress couldn’t give the film gravitas.  And Peter Jackson’s 2005 remake was incredibly gorgeous, but as that 3 hour film slogged on, it lacked a certain je nai se ape.

But Skull Island delivers the goods.  No, it’s not as good as the ’33 version.  Nothing ever will be.  Skull Island delivers what monster/kaiju fans crave; action, an interesting mythology, and more action. Because the folks that made 2014’s Godzilla also made this.  It looks and feels like old Toho, and that’s a compliment of the highest order. In Skull Island, I saw an incredibly good, well made, monster movie.  So yeah, I’m pretty happy inside.

And though the poster says “From The Producers Of Godzilla“, those guys brought writer Max Borenstein along for the ride.  That makes for a nice segue into the Monsterverse they’re creating.  Add Real Steel‘s Dan Gilroy, and there’s enough characterization to have you give a damn about these characters, instead of having them be pieces on a jungle chessboard.

Except for maybe Samuel L. Jackson.  Now shut your mouth; I love SLJ.  He can do no wrong in my eyes.  But as platoon leader (and human Big Bad) Preston Packard, he dials it up to 273 when everyone else is at 11.  I understood why his character was acting that way, but instead of heartbreak and dignity, it felt more like Snidley Whiplash In The Jungle.  Oh, what I wouldn’t give for just one or two more minutes of his backstory, for a modicum of grief to set the stage for the wild-eyed histrionics. But while we can always love some SLJ in high dudgeon, I craved just a little…more.

I felt for Kong more than I felt for Packard, and while a bonding with the King is standard ops for a Kong film, with an ensemble cast that allowed heroics (Hiddleston’s former SAS tracker), understanding (Brie Larson’s photojournalist Mason Weaver) and wariness (Corey Hawkins as second-fiddle scientist Houston Brooks)?  There certainly was room for a real dig-in for SLJ.

Alrighty.  This review’s a short one.  Why?  Because my asthma is kicking my tuchas, and because you’re either a Man In Suit fan or you’re not.  And if you are?  Run, do not walk to the nearest theater.  Grab some popcorn, snag the candy of your choice, and settle in.  Go big – IMAX is definitely worth the money, and 3D is groovy but if you can’t swing both, pick IMAX.  And bee-tee-dub…

1 Response to “Kong: Skull Island” – Kong gets monstrous in this excellent reboot