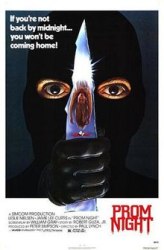 “Kill! The killer’s gonna get you!”

Story: Six years ago, a young girl was killed in a horrible accident. The kids that inadvertently caused her fall vow to never tell anyone what happened… Time for Alexander Hamilton High’s senior prom! (#WERK) I’m sure nobody will show up looking for bloody revenge. Cue the disco music!

Scares: Zero. This is just for the throwback giggles.

Splat factor: Zero. Everything happens off camera, and the results only show small bits of red.

Closing scene “shocker”?: 80s slasher movie? You’d think so, but nope. Not that that matters in this clunker.

Trick or Treat?: MAN this movie did not age well. Fuzzy and sometimes out of focus, it looks more like a television movie of the week. That could be the actual film stock going boink, though.

That doesn’t excuse the absolutely horrible acting though. As Principal Who Cares, Leslie Nielsen acts like he’s only read his lines once, and needs to blurt them out before he forgets. Guess he needed the money. Everybody’s gotta keep a roof over their head I guess.

The rest of the cast doesn’t fare much better, but at least we get Jamie Lee Curtis to liven things up. Or rather, she shines a light on exactly how godawful everyone else is. And let’s not forget the usual obvious twenty-somethings playing teens thing. Yeah, it’s something just about every 80s horror film did, but the halfass dialogue left me with nothing better to do than stare at the overage actors.

The killer’s crank calls to each of his intended victims is an interesting addition to this by-the-numbers slasher. Unfortunately, nothing else is interesting, except maybe those killer early 80s fashions. And the occasional bit of slang.

When the prom actually starts, there’s a huge dance number that I can only assume was put in to pad the run time. Or the director really loved Saturday Night Fever. The sound was obviously set to one level throughout, because the obligatory sex scene is practically on mute. The film was so silent during this scene, I figured there was a problem with my TV.

So why not grab some friends and drinking game this puppy?

Score: 1 out of 5 pumpkins, and that one is only for the divine Ms. Curtis.

Professional nerd. Lover of licorice.
View all posts by Denise →
This entry was posted in 31 in 31, In Horror, Movie Reviews and tagged 31 in 31, 80s Horror, Horror Movies. Bookmark the permalink.