“Aquaman” – DC does fine but could have done better 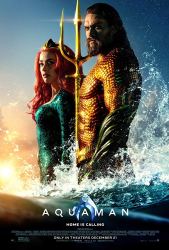 “Hurry up – I’m missing happy hour for this.”

Story: Arthur Curry has a lighthouse keeper for a dad and the Queen of Atlantis for a mom. Sure, he can put away a pint or twelve with the best of ’em, but can he step up when Atlantis needs a hero? What do you think?

Genre I’d Put It In: Fun But Clunky Superhero Flicks

Remake, Sequel, Based-On, or Original: Based on the DC superhero, part of the DC Cinematic Universe.

Gotta say: I want to like Aquaman more than I do. It’s absolutely gorgeous, and I’m not just talking about Mera (Amber Heard) and Aquaman/Arthur (Jason Momoa). The cinematography and CGI are absolutely astounding; think Avatar underwater. Even when the plot takes us to the Sahara, there’s a beautiful vastness to the shots that took my breath away. Sure, the costumes look a bit Inhumans, and the final superhero gold & green looks absolutely silly on Momoa (seriously – a more antiqued color scheme would have done wonders), but the attention to detail made my heart go pitter-pat.

Then there’s the story. Momoa sells the conflict raging in Arthur as he tries to figure out his place in the world. His on-screen chemistry with Temuera Morrison (as Arthur’s father Tom) feels real. The way the creators of this film blend Arthur’s love for his father with Aquaman’s need to stop his brother’s machinations is beautiful.

However, the addition of the Black Manta storyline is completely unecessary; cut this character out and the film would lose nothing but excess baggage. It’s a waste of an amazing character, and the rushed-through “why he’s gunning for Aquaman” personal drive is a disservice bordering on insult to Yahya Abdul-Manteen II (Manta) and Michael Beach (his father Jesse). Black Manta’s origin is a powerful one, and right up there with Killmonger in terms of villains that have a compelling reason for doing what they do. CUE INVISOTEXT: the idea that Manta’s grandfather took to high seas piracy because after WWII he came back to a United States that cast him aside because of the color of his skin? It’s a back story that deserved more than two minutes of exposition. I’d have loved a Black Manta origin that built on that backstory, then fed into an Aquaman sequel. It would have been much, much better. As it stands, once Black Manta’s backstory is rushed through, Yahya is given little more to do than give his best Angry Kanye face.

And then there’s Atlantis. Willem Dafoe! Patrick Wilson! Dolph Lundgren! Nicole Kidman! I love these guys! While the screenwriters did well with blending of Arthur’s land and sea life, they really suck at expositional dialogue. Every time a character blurts out a stilted (and much too lengthy) stream of 411 to help Arthur and the audience keep up, things fall flat. I cringed every single time someone had to say something informational because it felt so forced. Yeah, exposition is needed, especially in a first film for a character. When done well it’s absolutely beautiful (see: Titanic, Iron Man and Whiplash), but when it’s bad? It’s horrid.

Okay, let’s wrap this up. Momoa is amazing as Arthur Curry, but you knew that from Justice League. Amber Heard’s Mera channels Princess/General Leia in her highborn badass self. The romance between Tom Curry and Nicole Kidman’s Queen Atlanna pulled all of my heartstrings. The Seven Kingdoms pf Atlantis (even though The Brine’s uber-crustatean made me think of Shiny from Momoa) are beautiful and each have their own unique look that made me want to know more. Aquaman’s badass Sea Dragon, and all the battle creatures the various Kingdoms use, are suitably beautiful and formidable. And I want to see more #DrunkAquaman! There’s so much to love about this movie. But it could have been so much better. I wanted so much better. But I got…okay. Ish. Turn your brain off, and enjoy. Hell, the cast here is so pretty you can watch this on mute and still have fun.

#Protip: The jellyfish haute couture Mera wears is as deadly as it is beautiful; looks like it was made from Portuguese Man O’ War. CGI siphonophores, but still. I’d admire it from afar.