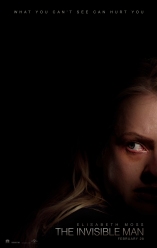 Story: Cecilia is in a really, really bad relationship. But she gets an opportunity to run, and she takes it. Later, while suffering from PTSD, she finds out that her ex-boyfriend/computer optics mogul Adrian has killed himself. And left her five million dollars…as long as she can stay sane, and out of legal trouble. As strange things start to happen around her, one by one her friends and family start to think she’s gone crazy. Wait – is he really here?

Remake, Sequel, Based-On, or Original: Based on the classic Universal Monster, and H.G. Wells’ novel.

Gotta say: I, like many other individuals, know what relationship abuse feel like up close. Years ago, a lovely coworker of mine was gunned down in her front yard by an “ex-boyfriend” that had been stalking her since high school. He was never charged because “there wasn’t enough evidence”. Yeah. So when Blumhouse’s Leigh Whannell took a shot at writing/directing Invisible, with a plot of relationship abuse gone pitch-dark? I heard the choppers.

But the power and agency in Invisible‘s Cecilia feels like wish fulfillment for anyone who’s suffered, or seen someone they care about suffer, from abuse. Here things get tied up with a nice, blood-red bow, with a whiff of girl power vibes from titles like You’re Next and I Spit on Your Grave. Whannell and the entire cast deliver a pulse-pounding horror fest that brings a fresh spin on the classic monster. In this story, Adrian was monstrous long before his ability to change his visual aspect. His abilities only serve to let him act on his impulses, and play a devious cat-and-mouse long game with the woman he sees as “his”. And it’s positively chilling.

Oliver Jackson-Cohen, so wonderfully sweet in The Haunting of Hill House, delivers a performance steeped in understated evil as Adrian. He’s not onscreen that much – well, visibly at least – but when he is, it’s brilliant. There’s a captivating chess-game chemistry between Jackson-Cohen and Moss that jumps off the screen with electric intensity. And as Cecilia, Moss uses her ability to rapidly shift emotional gears to perfection. The layers upon layers these two performers give to their characters is a freakin’ master class in how to do it right. And they inhabit their characters so thoroughly they  make it look easy. My mind, it is blown. Let me not forget Aldis Hodge and Storm Reid as Cecilia’s BFF James and his teen daughter Sydney. Both do a lot of emotional heavy lifting when Moss’ Cecilia comes to stay, as they try to wrap their minds around what’s going on, coming closer and closer to some seriously creepy stuff.

Whannell’s high-tech spin on the Invisible Man tale feels believable, as if we’re thisclose to that kind of tech actually existing. (Hey, who knows if it actually does…?) He could have taken that basic idea and spun it into the usual “then the scientist goes bonkers” plot we’ve seen (and loved) before. But blending beyond high-tone tech with 21st Century pro-feminism turns this tale into one that will resonate with modern audiences.

If this is how Blumhouse does the Universal classic monsters? I’m up for more. This is the Dark Universe I was hoping for, before Cruise crapped all over that franchise. Go get your scare on.

#Protip: Don’t bother staying for an end or post-credits “Bughuul!” jump scare. This film wraps up the main story quite nicely before those credits roll. Well done, Blumhouse.

Professional nerd. Lover of licorice.
View all posts by Denise →
This entry was posted in 7 Pieces Of, Movie Reviews and tagged Horror Movies, In Horror, Movie Reviews, Remakes. Bookmark the permalink.